3D
Scan The World
7,703 views 374 downloads
3 collections
Community Prints Add your picture
Be the first to share a picture of this printed object
0 comments

A large right hand, itself emerging from a very roughhewn block of marble, holds a clod of earth in which two struggling emergent figures, Adam and Eve , have been modelled. The hand of the original Creator is also that of the sculptor.   Numerous features – the contrast between the highly polished areas and the rough marble, the posture of the woman reminiscent of Dawn in the Medici Chapel, San Lorenzo (Florence) – recall the work of Michelangelo. For the latter, a sculpture was buried in the marble and had to be extracted from it through the artist’s skill, but Rodin was a modeller, which implied a different approach. The Hand of God seems to be a synthesis of these two very dissimilar methods. The Hand of the Devil forms a companion piece, while its Symbolistic title links it to a whole series of works made during the 1890s, such as The Cathedral and The Secret.

Printed by PRINT3Dforum.com Printing services - Support is required for this piece. 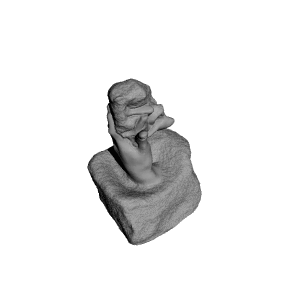 ×
3 collections where you can find Hand of God at The Musée Rodin, Paris by Musée Rodin