3D
Scan The World
4,485 views 239 downloads
1 collection
Community Prints Add your picture
Be the first to share a picture of this printed object
0 comments

The ancients tell of how one day Athena made a double flute with the bones of a stag and played it at a banquet of the gods, delighting them. Hera and Aphrodite, however, laughed at how ludicrious she looked when she puffed out her cheeks to play her new instrument. Angered, Athena threw it away, laying a curse on anyone who might pick it up. The satyr Marsyas found the flute, and thus became the unwitting victim of the goddess's curse.

A follower of Cybele, he went about the woods of Phrygia playing the flute so well that he thought he could challenge Apollo and his lyre. The contest took place, with the Muses as judges. It was agreed that the winner would inflict anything he pleased on the loser. The contest proved to be a tie, until Apollo turned his lyre upside down, and played and sang at the same time, challenging marsyas to do as much with his instrument. As this was obviously impossible with a flute, the god was proclaimed the winner and took a most cruel revenge on the satyr who had dared compete with him: he hung him and from a tree and flayed him alive. Blood flowed from every part of Marsyas's body, his muscles, veins and palpitating bowels exposed. For a long time the satyrs and the nymphs mourned him, and the years they shed fed a river in Phrygia that was called the Marsyas.

Most scholars agree that the iconography of the Hanging Marsyas originated in Pergamon, in Asia Minor. Here, in the Hellenistic period (between the late third and early second century B.C.), artists created and elaborated upon a sculptural group made up of the figures of Apollo, Marsyas hanging from the tree and the Scythian slave who flayed him (the so-called Knife-Grinder).

The statue (inv. MC 5576) was discovered in July 2009 during an archaeological excavation campaign at the side of an ancient Roman villa known today as the Villa delle Vignacce - Villa of the Vineyards - in the Park of the Aqueducts (located between the Appian Way and the Via Tuscolana on the southern outskirts of Rome). The excavation was carried out by the American Institute for Roman Culture under an agreement with the city of Rome's Heritage Superintendency.

The villa stood on the south side of the ancient Via Latina. At the height of its splendor it belonged to Quintus Servilius Pudens, an extremely wealthy brick manufacturer and friend of the emperor Hadrian (117-138 A.D.).

His business was operating in 123 A.D., if not earlier, and continued until the end of Hadrian's reign; his bricks were used to build the emperor's villa in Tivoli.

The statue was carved out of a single block of reddish-purple-veiled marble that came from Asia Minor. Its feet and left hand were not found, but they were probably made of white marble, as is the right hand. The eyeballs are made of white limestone and the irises of glass paste; the contours of the eyes and the lashes are in bronze. Traces of red ocher were found on the tree trunk, which was probably painted red because here the veiling of the stone block was paler. Very small traces of vermilion were found at the corners of the mouth and eyes. The discovery of this statue of the Hanging Marsyas is especially important because its features have broadened the spectrum of this iconography, besides adding to our knowledge of the artworks produced by a group of sculptors who came from the city of Aphrodisias in Caria (Asia Minor) and created during the reign of Hadian a number of extremely fine statues (including, we believe, this one). Moreover, the fact that this statue was found in a known residential compled that under Hadrian belonged to Q. Servilius Pudens enables us to identify hypothetical buy plausible links between the Vignacce Marsyas and three statues found at Hadrian's Villa in Tivoli - the two Centaurs in bigio morato marble, signed by Ariseas and Papias, and the Drunken Faun in rosso antico marble - which were sculpted by artists from Aphrodisias.

The Vignacce statue is a sophisticated versaion of the Hanging Marsyas. In other examples, the face is contracted and disfigured by atrocious suffering; in this one, the expression of pain does not distort the satyr's features. This different sensitivity on the sculptor's park appears quite evident when we compare this work to the Marsyas that stood in the ancient Gardens of Maecenas, whose face is convulsed and altered in its proportions, its frontal bosses overly pronounced, the mouth contorted. 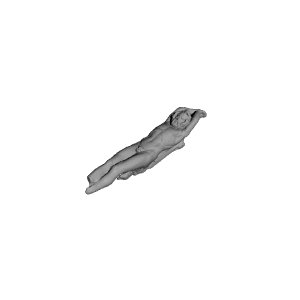