3D
Scan The World
4,766 views 653 downloads
5 collections
Community Prints Add your picture
Be the first to share a picture of this printed object
0 comments

Bourdelle's early work, Hannibal's Frist Victory was presented at the Salon des Artistes Francais in 1885, where the artwork obtained an honourable mention. Just at the age of just twenty-four-years-old, Bourdelle was heading to a promising career as a young sculptor.

Bourdelle was inspired by reading the Salammbo by novelist Gustave Flaubert (1821-1880) that he manifested the story into a sculpture piece. The book tells a bloody episode of Hannibal's childhood, the killing of an eagle by the force of his arms. The virtuoso treatment of the work allows the artist to signal his mastery in the rendering of anatomy and his science in composition. A series of sketches that have been preserved at the Bourdelle museum and at the Ingres Museum in Montauban bear witness to the care Bourdelle took to determine the latitude of the eagle and the child. 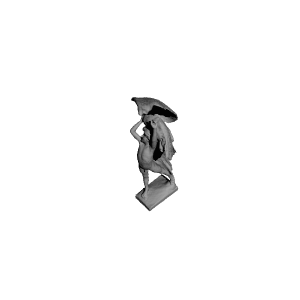