Haremhab as a Scribe of the King

3D
Scan The World
2,798 views 186 downloads
2 collections
Community Prints Add your picture
Be the first to share a picture of this printed object
0 comments

Haremhab as a Scribe of the King

Haremhab was a royal scribe and general of the army under Tutankhamun. He continued to serve during the reign of Aya and eventually succeeded Aya as king. This statue was made before Haremhab ascended the throne. By having himself depicted as a scribe, Haremhab declares himself to be among the elite group of literate individuals, thus following a tradition more than a thousand years old of depicting great officials as men of wisdom and learning.

He sits erect, but relaxed, his gaze slightly down. Across his knees he unrolls a papyrus scroll on which he has composed a hymn to the god Thoth, patron of scribes. A shell containing ink lies on his left knee. Over his left shoulder is a strap with a miniature scribe's kit attached to each end. A figure of the god Amun is incised on his forearm, perhaps indicating a tattoo.

In this statue the unlined, youthful face is belied by the potbelly and the folds of flesh beneath the breasts. These artistic conventions indicate that the subject has reached the age of wisdom. Although the scribal pose exhibits the frontal orientation common to all formal Egyptian statue, it may be appreciated more fully as a piece of sculpture in the round since it has no back pillar. The youthful face reflects the features seen on many statues depicting Tutankhamun (50.6), and the style of this magnificent life-size sculpture retains some of the softness and naturalism of the earlier Amarna period while looking forward to later Ramesside art. 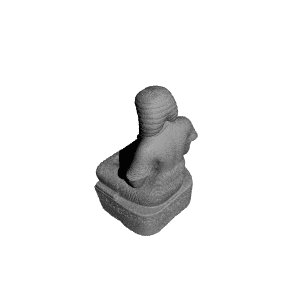