3D
Support Free Scan The World
2,726 views 71 downloads
Community Prints Add your picture
Be the first to share a picture of this printed object
0 comments

Large face ornaments were placed on the hoses' heads just below their ears, these ornaments would have been laid along the noses of horses harnessed to chariots.

The 10th century BC started the first day of 1000 BC and ended the last day of 901 BC. This period followed the Bronze Age collapse in the Near East, and the century saw the Early Iron Agetake hold there. The Greek Dark Ages which had come about in 1200 BC continued. The Neo-Assyrian Empire is established towards the end of the 10th century BC. In Iron Age India, the Vedic period is ongoing. In China, the Zhou Dynasty is in power. The European Bronze Age continued with Urnfield culture. Japan was inhabited by an evolving hunter-gatherer society during the Jomon period.

The Western Zhou period (1046–771 BC) was the first half of the Zhou dynasty of ancient China. It began when King Wu of Zhou overthrew the Shang dynasty at the Battle of Muye. The dynasty was successful for about seventy-five years and then slowly lost power. The former Shang lands were divided into hereditary fiefs which became increasingly independent of the king. In 771, the Zhou were driven out of the Wei Rivervalley; afterwards real power was in the hands of the king's nominal vassals.

Few records survive from this early period and accounts from the Western Zhou period cover little beyond a list of kings with uncertain dates. King Wu died two or three years after the conquest. Because his son, King Cheng of Zhou was young, his brother, the Duke of Zhou assisted the young and inexperienced king as regent. Wu's other brothers, concerned about the Duke of Zhou's growing power, formed an alliance with other regional rulers and Shang remnants in a rebellion. The Duke of Zhou stamped out this rebellion and conquered more territory to bring other people under Zhou rule. The Duke formulated the Mandate of Heaven doctrine to counter Shang claims to a divine right of rule and founded Luoyang as an eastern capital. With a feudal fengjian system, royal relatives and generals were given fiefs in the east, including Luoyang, Jin, Ying, Lu, Qi and Yan. While this was designed to maintain Zhou authority as it expanded its rule over a larger amount of territory, many of these became major states when the dynasty weakened. When the Duke of Zhou stepped down as regent, the remainder of Cheng's reign (1042–1021 BC) and that of his son King Kang of Zhou (1021–996 BC) seem to have been peaceful and prosperous. 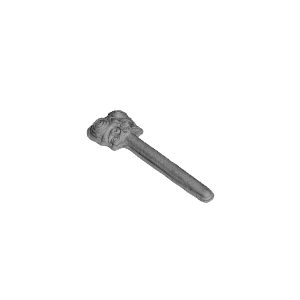 ×
0 collections where you can find Harness Frontlet 1 at The British Museum, London by Scan The World