3D
Support Free Scan The World
1,892 views 56 downloads
Community Prints Add your picture
Be the first to share a picture of this printed object
0 comments

These ornaments would have been laid along the noses of horses harnessed to chariots. Large face ornaments, like this one, were placed on the horses heads just below their ears.

The 10th century BC started the first day of 1000 BC and ended the last day of 901 BC. This period followed the Bronze Age collapsein the Near East, and the century saw the Early Iron Age take hold there. The Greek Dark Ages which had come about in 1200 BC continued. The Neo-Assyrian Empire is established towards the end of the 10th century BC. In Iron Age India, the Vedic period is ongoing. In China, the Zhou Dynasty is in power. The European Bronze Age continued with Urnfield culture. Japan was inhabited by an evolvinghunter-gatherer society during the Jomon period 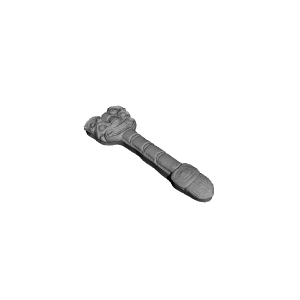 ×
0 collections where you can find Harness Frontlet 2 at The British Museum, London by Scan The World