Head from a statue of an Amazon

Head from a statue of an Amazon

This head is a plaster copy of an original (1805,0703.80) at The British Museum, London. The original marble was mounted on a modern socle and was 'brought from Rome to England by the late Mr Lyde Browne' (TY 12/3 Street Parlour 1).

The type of bust has been associated with the Greek sculptor Polykleitos, carved around the 2nd Century. The head is one of several extant copies devived from a fifth-century BC Greek statue of a wounded Amazon leaning on a post, of which the best complete example, formerly in Lansdowne House, London, is now in The Metropolitan Museum of Art, New York. It is reputed to be derived from one of four statues that were said by Pliny to have been made competitively by Polykleitos, Pheidias, Kresilas, and Phradmon".
- Text from The British Museum

For a discussion of the types and the various attempted attributions, see Bothmer, Amazons, 216-22. For more information on the types of Amazon statues, see this Wikipedia article. 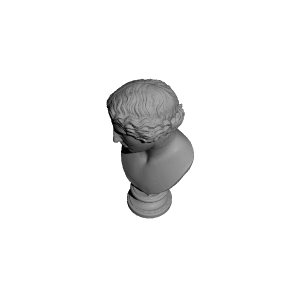 ×
4 collections where you can find Head from a statue of an Amazon by SMK - Statens Museum for Kunst
×
sarmat1
@sarmat1
1
Printed on: ELEGOO Mars UV Photocuring LCD 3D Printer
Material: Resin
Posted at: 24th September 2021