Head from a Statue with Magical Texts

3D
360°
Scan The World
1,308 views 30 downloads
Community Prints Add your picture
Be the first to share a picture of this printed object
0 comments

Head from a Statue with Magical Texts

Magical texts like those on the Metternich stela (50.85) probably covered all but the face, feet, and hands of the statue to which this fragment belonged. The statue would have stood in a temple where it could be visited by persons wishing to be healed. Inscribed statues of this type can almost all be dated to the fourth century.

A man well-advanced in years is depicted, his skin soft and marked by fine creases but his small eyes and his wide mouth still sure. Realistic representations are known from late Dynasty 26 and probably continued to be made during the Persian Period, although little can be assigned to that interval with certainty; thereafter they knew continuous popularity from the fourth century until the end of the Ptolemaic Period. 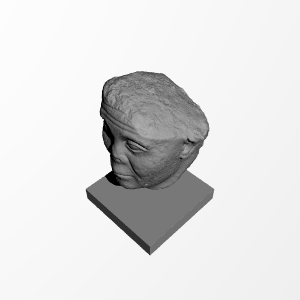