The Cyclades are a group of islands in the southern Aegean situated between Greece and Turkey. The name was coined in the Archaic periodas the islands form an approximate circle (kyklos) around the central and most sacred island (at that time) of Delos. The islands had a distinctive culture in the early and middle Bronze Age and regained regional importance during the Archaic and Classical periods.

Cycladic art encompasses the visual art of the ancient Cycladic civilization, which flourished in the islands of the Aegean Sea from 3300 -2000 BCE. Along with the Minoans and Mycenaeans, the Cycladic people are counted among the three major Aegean cultures. Cycladic art therefore comprises one of the three main branches of Aegean art. Read more about this here and here.

This marble head depicts a Cycladic idol, originally found in the island of Keros at the heart of the Cyclades around 2500-2000 BC. The author of the sculpture is unknown and it is currently preserved on permanent display at the Department of Greek, Etruscan and Roman antiquities in the Louvre, Paris.

It is believed that this head is fragment of a large sculpture, probably belonging to a statue of a nude woman, arms crossed under the breasts, in a slightly arched position and head slightly tilted back; it is common for many sculptures in this style to depict nude figures, either singular or in groups and families.

This series of Cycladic heads is incredibly clearly defined and easy to detect, in particular in regard to the heads which are in an almost oval shape and its characteristic of the single nose mark. Bodies were  also similarly as abstract but were almost always in proportion. This kind of statuette was found is a large number in Cycladic tombs of the bronze age; instead of being idols (as it was believed for a long while) they symbolize death, more like a figurative stele of tombstone. 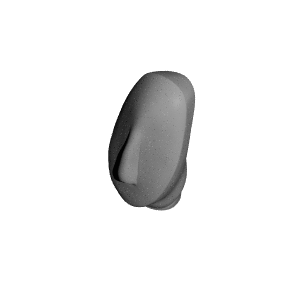