Head from the statue of Athena Parthenos

3D
360°
Featured Scan The World
4,296 views 542 downloads
7 collections
Community Prints Add your picture
Be the first to share a picture of this printed object
4 comments

Head from the statue of Athena Parthenos

This larger-than-life head is a restored and reworked version of the Athena Parthenos from the Library of Pergamon, now housed at the Pergamon Museum in Berlin.

The Athena from the Pergamon is modelled from an original colossal cryselephantine sculpture of the goddess, made by Phidias and his assistants for the Parthenon in Athens.

Although Pheidias' original is lost, two small copies, known as the "Varvakeion statuette" and "Lenormant Athena", in the National Archaeological Museum, Athens, and other copies found around the Graeco-Roman world provide modern scholars with an idea of how it looked.

It is undeniable that this head is less decorated than the other copies that exist, but since the statue is thought to have stood in the Pergamon Library, perhaps it was considered even in Hellenistic times as much as a museum piece as a sacred image. 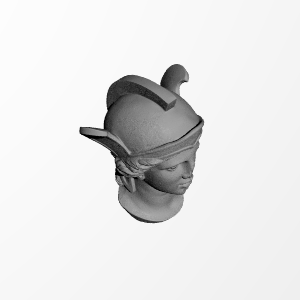