Head of a Bearded Deity

3D
Scan The World
1,815 views 55 downloads
Community Prints Add your picture
Be the first to share a picture of this printed object
0 comments

Head of a Bearded Deity

The angular transition between the sides and the back of the neck indicates that the head comes from a herm rather than a statue. Herms, the rectangular pillars surmounted by a head of Hermes, are first attested during the last quarter of the sixth century B.C. They were used primarily as boundary markers and guardians of entrances and thoroughfares. In the fifth century B.C., other deities such as Zeus were also represented in herm form and the monuments were used for a wider variety of functions. It is not possible to identify the god represented here. The elaborate hairstyle consisting of two long braids coiled around the head and held in place by a flat band is often found on images of Zeus or Poseidon. The eyes are a classical depiction of ancient cypro-attic art. 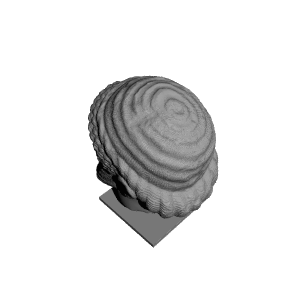