Head of a Bearded Man

3D
360°
Featured Scan The World
2,279 views 242 downloads
3 collections
Community Prints Add your picture
Be the first to share a picture of this printed object
0 comments

Head of a Bearded Man

This head, an example of Italian late Gothic art, is believed to be by Giovanni Pisano, who trained under his father Nicola Pisano (c. 1220/1225 - c. 1284) at his workshop, his so-called “botecca”.

In terms of style and technique the head is reminiscent of the many sculptures appearing in the reliefs and pedestal bases of his principal work: the pulpit at the baptistery in Pisa, which was carve from marble between 1302 and 1310.

Recent studies show that the head is presumably from the sepulchral monument, now destroyed, created for Margaret of Luxembourg in 1311.

Giovanni Pisano was the greatest sculptor of his day because he mastered the art of assimilating the reliefs of classical Antiquity, used e.g. on sarcophagi, combining it with his own dramatic and highly narrative style.

The face is very expressive and lifelike for its time. The drama is accentuated by the pronounced contrasts between light and shadow created by the holes bored into the hair and beard. Even the eyes have been brought to life with drilled holes. 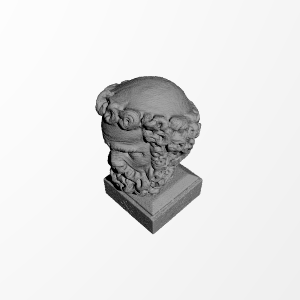