Head of a Bearded Man at the Getty Villa, Los Angeles

Head of a Bearded Man at the Getty Villa, Los Angeles

An older man with a short beard confronts the viewer with an intense gaze and furrowed brow. The head belongs to a larger category of portraiture that arose in the wake of Alexander the Great: portraits of Hellenistic rulers. Designed as propaganda to legitimize the ruler and emphasize dynastic connections, these portraits are often highly idealized images of their subjects, bearing an intentional similarity to each other. Yet, with the bump in his nose, his square jaw, and the folds between his cheek and mouth, this portrait captures this man's individuality.

This head is all that remains of a larger than life-size, full-length portrait statue. The scale of the work implies that it was a public monument rather than a private commission. Sculptors in the Hellenistic kingdom of Pergamon frequently used such grayish marble. Since the figure does not wear a diadem, he cannot have been a ruler when the statue was erected. Yet, his scale and regal bearing clearly suggest that he is a member of a royal family, perhaps of Pergamon.

This print is made on MakerBot Replicator Fifth Generation. The dimension of the model 80mm x 66mm x 110mm, Infill 30%, with support and layer high 0,2. Provides very nice results! 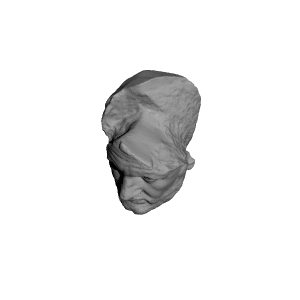 ×
1 collections where you can find Head of a Bearded Man at the Getty Villa, Los Angeles by Scan The World
×
3D construction
@construction
0
Printed on: Ultimaker 2
Material: PLA
Posted at: 22nd September 2021
Loading comments...