Head of a Bodhisattva at The Guimet Museum, Paris

3D
Scan The World
2,422 views 140 downloads
Community Prints Add your picture
Be the first to share a picture of this printed object
0 comments

Head of a Bodhisattva at The Guimet Museum, Paris

In Buddhism, a bodhisattva is an enlightened (bodhi) being (sattva). Traditionally, a bodhisattva is anyone who, motivated by great compassion, has generated bodhicitta, which is a spontaneous wish to attain Buddhahood for the benefit of all sentient beings. According to Tibetan Buddhism, a Bodhisattva is one of the four sublime states a human can achieve in life (the others being an Arhat, Buddha, or Pratyeka buddha).

Usage of the term bodhisattva has evolved over time. In early Indian Buddhism, for example, the term bodhisattva was primarily used to refer specifically to the Buddha in his former lives. The Jatakas, which are the stories of his lives, depict the various attempts of the bodhisattva to embrace qualities like self-sacrifice and morality. The bodhisattva is a popular subject in Buddhist art.

This head of a budda is on a colossal scale and would have been attached to a body which is now missing. It was found where it was created in Uttar Pradesh, a region of Mathura. It was created in the Kusana style, an artwork from the 1st or start of the 2nd century, made out of red granite. 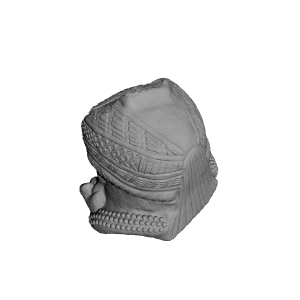 ×
0 collections where you can find Head of a Bodhisattva at The Guimet Museum, Paris by Scan The World