Head of a colossal statue of Zeus-Ammon

3D
Scan The World
3,145 views 206 downloads
2 collections
Community Prints Add your picture
Be the first to share a picture of this printed object
0 comments

Head of a colossal statue of Zeus-Ammon

While Zeus was the most powerful god in the Greek pantheon, ancient Egypt was wholly dominated, both religiously and politically, by the sun god, Ammon (Amun-Re). Greece, which owes a great deal to Egyptian culture, absorbed many influences from its southern neighbour. One example of this is the Greek oracular cult of the syncretic god Zeus-Ammon. This god, spanning the different cultures, was worshipped especially in the Greek colony of Cyrenaica on the North African coast, but also in Sparta and Thebes.

The mighty marble head in the Liebieghaus probably originated in what is now Tunisia. The splendid hair and beard underline the god’s lordly power. At the sides of the forceful face are twisted ram’s horns. In Egyptian art, Amun-Re is shown either as a man with blue skin and an erect penis or in the form of a man’s body with a ram’s head. Like the phallus, the ram emphasises the god’s life-giving potency and fertility.

Zeus-Ammon is an oracular god and thus stands in the tradition of the prophetic deity, Amun-Re. The principal shrine of the Egyptian god was the famous, vast temple complex at Karnak near Thebes. During important phases, these oracles and their priests were so powerful that they determined the politics of the whole of Egypt. 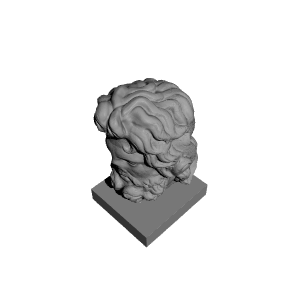