Head of a Fair Haired Boy

3D
Scan The World
1,737 views 67 downloads
Community Prints Add your picture
Be the first to share a picture of this printed object
0 comments

Head of a Fair Haired Boy

Head of young man with blond hair, as indicated by the well-preserved traces of yellow paint on hair when found. Thick mop of hair ending in rows of curls in front, braided in back. Somewhat heavy, fleshy features. Head tilted noticeably to right, which corresponds with the fragment of lower torso usually associated with it. Both show elements of early classical pose with weight on left side of body.

Schematic treatment of hair links the head with archaic predecessors. Severe, vacant look of face is reminiscent of the Kritios Boy (Athens,Acropolis 698), which must be close in date. The strong tilt of the head to the right with a corresponding shift in the torso fragment is characteristic of the emerging Early Classical style. The often cited association with Persian debris is uncertain, hence there is no sure terminus ante quem. Some scholars see a Peloponnesian quality in the work, usually described as a heaviness of form, but there is no hard evidence to link this statue with any known sculptor.

support。Before it was because of the shooting angle is not good?Or other reasons 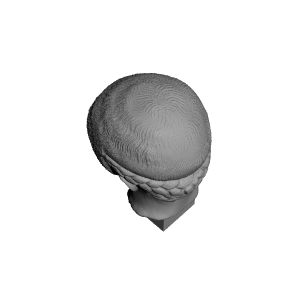