3D
Support Free Scan The World
2,469 views 90 downloads
1 collection
Community Prints Add your picture
Be the first to share a picture of this printed object
0 comments

"In Greek mythology a Gorgon was a ruthless monster feminine simultaneously a deity protection from the most ancient religious concepts. His power was so great that anyone who tried to look was petrified , so its image was located in all kinds of places, from temples to craters of wine , to promote their protection. The Gorgon wore a belt of snakes , interlaced like a buckle and confronted each other.

In later myths she said that there were three Gorgons, Medusa , Esteno and Euryale, and the only mortal of them, Medusa, had poisonous snakes for hair as punishment from the goddess Athena . This image became particularly famous, although the Gorgon appears in the oldest written records of the religious beliefs of ancient Greece, as in the works of Homer . The Gorgon occupied the principal place of gable of a temple in Corfu . It is the oldest stone pediment in Greece, being dated c.600. C." 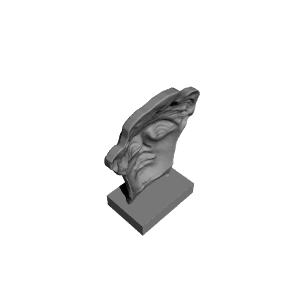 ×
1 collections where you can find Antefix (end-tile) head of the Gorgon nr1 at The British Museum, London by Scan The World