Head of a King from the Ptolemaic period

3D
Scan The World
2,086 views 113 downloads
Community Prints Add your picture
Be the first to share a picture of this printed object
0 comments

Head of a King from the Ptolemaic period

The Ptolemaic Kingdom was founded in 305 BC by Ptolemy I Soter, who declared himself Pharaoh of Egypt and created a powerful Hellenistic dynasty that ruled an area stretching from southern Syria to Cyrene and south to Nubia. Alexandria became the capital city and a major center of Greek culture and trade. To gain recognition by the native Egyptian populace, they named themselves the successors to the Pharaohs. The later Ptolemies took on Egyptian traditions by marrying their siblings, had themselves portrayed on public monuments in Egyptian style and dress, and participated in Egyptian religious life. The Ptolemies had to fight native rebellions and were involved in foreign and civil wars that led to the decline of the kingdom and its final annexation by Rome. Hellenistic culture continued to thrive in Egypt throughout the Roman and Byzantine periods until the Muslim conquest.

This sculpture is a striking example of the blending of Greek and Egyptian cultures during the Ptolemaic period as the head here depicted could either belong to Zeus or Amon. 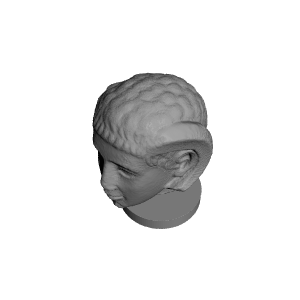