Head of a priest

3D
Scan The World
1,237 views 43 downloads
Community Prints Add your picture
Be the first to share a picture of this printed object
0 comments

Head of a priest

This fragment was found in Palmyra.

Palmyra became part of the Roman Empire when it was annexed and paid tribute early in the reign of Tiberius, around 14 AD. The Romans included Palmyra in the province of Syria, and defined the region's boundaries; a boundary marker laid by Roman governor Silanus was found 75 kilometres northwest of the city at Khirbet el-Bilaas. A marker at the city's southwestern border was found at Qasr al-Hayr al-Gharbi, and its eastern border extended to the Euphrates valley. This region included numerous villages subordinate to the center such as al-Qaryatayn (35 other settlements have been identified by 2012).

The Roman imperial period brought great prosperity to the city, which enjoyed a privileged status under the empire—retaining much of its internal autonomy, being ruled by a council, and incorporating many Greek city-state (polis) institutions into its government. 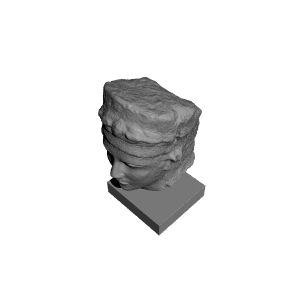