3D
Scan The World
5,086 views 147 downloads
Community Prints Add your picture
Be the first to share a picture of this printed object
0 comments

This Roman imperial portrait head, which is in excellent condition, adds to two areas of the Museum's ancient art collection: Roman portraiture and Near Eastern art. Roman portraits from the late second to the early fourth century A.D. are frequently masterpieces of subtle modeling and expressive psychology. The native Roman taste for realism in portraiture was broadened to include suggestions of personality and even religious temperament during this period. The face and hair of this portrait head are carved with the rich, sensuous realism of portrait sculpture in this cosmopolitan era of the Roman Empire. However, the priestly role represented by the man's conical headdress is specific to the Asian parts of the Roman Empire.

Similar elaborate representations of priests are found in Asia Minor and in the arts of Palmyra, as well as in Syria proper, where this head originated. Many examples of Palmyrene portrait sculpture may be found in museums in both the United States and Europe. In a Palmyrene funerary group in the National Museum, Damascus, depicting a husband and wife, the man wears a headdress that fully covers his hair and is decorated with a wreath and priest's bust, indicating his profession. The relief of Aphlad, also in the National Museum, Damascus, depicts a priest in a cap similar to the one on the Dallas Museum of Art head, but with his hair showing under its rim. Other analogies to this head may be seen in Anatolian sculptures of priests, such as a fine funerary portrait in the Adana Museum, Turkey, in which the headdress indicates the man's role as a priest in his lifetime.

The conical headdress goes back centuries in Near Eastern religious art. Originally the mark of a divinity, by the time of the Roman Empire it was the regalia of priests of various Syrian and Anatolian deities. A priest of the Anatolian mother-goddess Cybele in the museum in Ostia, Italy, wears such a headdress. The well-known frescoes from a synagogue in Dura-Europus, Syria, now in the Damascus museum, also show priests wearing such headdresses. However, the idealized nude Greek figures ornamenting the headdress on the Dallas Museum of Art head represent a complete fusion of Near Eastern beliefs and Greco-Roman style. The incised eyes, which give the figure a hypnotic intensity, are typical of such late Roman portraits and are often emphasized to suggest the spiritual state of the person represented. The syncretic character of religion and culture in the eastern parts of the Roman Empire are well represented by this handsome head. It carries on the tradition of Roman portraiture, represented by the Dallas Museum of Art's two great second-century portraits of two young men.

The model prints outs very nicely but needs supports and additional finishing to remove the supports. 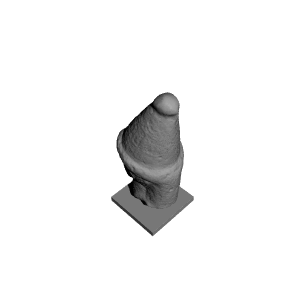 ×
0 collections where you can find Head of a Priest at The Dallas Museum of Art, Texas by 3DLirious