Head of a large terracotta statue of a female with a tall kalathos (basket-shaped) crown decorated with flowers at The British Museum, London

3D
Scan The World
2,504 views 113 downloads
Community Prints Add your picture
Be the first to share a picture of this printed object
0 comments

Head of a large terracotta statue of a female with a tall kalathos (basket-shaped) crown decorated with flowers at The British Museum, London

"Found in the Sanctuary of the Great Goddess (Artemis), Achna 4th century BC. Images of women wearing this kind of headdress become very popular on Cyprus in this period, reflecting a mix of Greek and local styles. The floral imagery (also on the earrings) may reflect the themes of nature and fertility."

"Cyprus is an island country in the Eastern Mediterranean Sea, off the coasts of Syria and Turkey. Cyprus is the third largest and third most populous island in the Mediterranean, and a member state of the European Union. It is located south of Turkey, west of Syria and Lebanon, northwest of Israel, north of Egypt and east of Greece. The earliest known human activity on the island dates to around the 10th millennium BC. Archaeological remains from this period include the well-preserved Neolithic village of Khirokitia, and Cyprus is home to some of the oldest water wells in the world. Cyprus was settled by Mycenaean Greeksin two waves in the 2nd millennium BC. As a strategic location in the Middle East, it was subsequently occupied by several major powers, including the empires of the Assyrians, Egyptians and Persians, from whom the island was seized in 333 BC by Alexander the Great. Subsequent rule by Ptolemaic Egypt, the Classical and Eastern Roman Empire, Arab caliphates for a short period, the French Lusignan dynasty and the Venetians, was followed by over three centuries of Ottoman rule between 1571 and 1878." 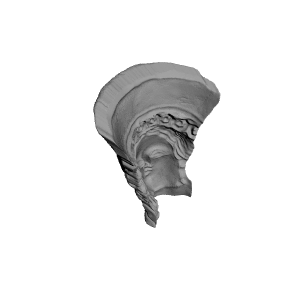 ×
0 collections where you can find Head of a large terracotta statue of a female with a tall kalathos (basket-shaped) crown decorated with flowers at The British Museum, London by Scan The World