3D
Scan The World
5,753 views 168 downloads
4 collections
Community Prints Add your picture
Be the first to share a picture of this printed object
0 comments

The warrior motif and the plaster's resemblance to pristine white marble allude to classical sculpture, but this work is, in fact, built from an assortment of found objects. The industrial pipe on which the warrior leans is only one of many surprising objects Picasso incorporated into this sculpture; others have been covered in plaster. A tennis ball forms the shape of each eye, X–ray analysis has revealed a crowbar lodged in the warrior's neck, and the ridges toward the base of the sculpture are formed from corrugated metal or cardboard. The warrior’s semicircular headdress is supported by a piece of chicken wire and decorated with discarded pieces of sculptural molds. 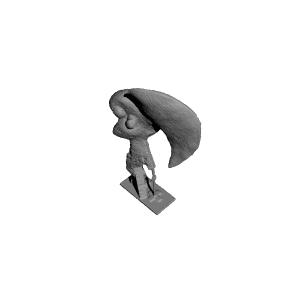 ×
4 collections where you can find Head of a Warrior at MoMA, New York by Scan The World