Head of a Woman or Apollo

3D
Featured Scan The World
6,233 views 1,162 downloads
6 collections
Community Prints Add your picture
Be the first to share a picture of this printed object
0 comments

Head of a Woman or Apollo

The original marble bust from what this cast was made stands in the Sala dei Busti at The Museo Pio-Clementino (Vatican Museums), after it was part of the vast collection of Cardinal Albani. It is believed to have been created around the 4th century BC.

The sitter of the sculpture is undetermined and has been subject to various interpretations both the academic and artistic circles. Most likely associated with the school of Kephisodotos in the early 4th Century BC the work can be considered to have been created at a similar time to that of The Apollo of Mantua (Louvre) which echoes the adrogynous subject and coiffure, albeit much more flamborant and elaborate.

Another bust, titled The Head of Apollo and part of the Ince Blundell collection of The Liverpool Museums, further echoes the style of this sculpture. The bust has almost exact similarities in its youthful male and feminine features, as well as the characterized thick ring of locks which sweep around the face into a topknot with loose ringlets falling onto the shoulders and nape of the neck. As the Blundell Apollo is in such clean condition, it is suspected that it is a copy of this bust of the Vatican Museum which inspired many 18th Century replicas. The sculpture has also been misidentified as a bust of Isis due to the over the brow lotus-like lock of hair, though this has been refuted.

Sculptures with similar styles include the Apollos at The British Museum and Ny Carlsberg Glyptotek and The Apollo Citharoedus. 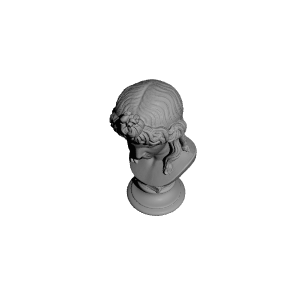