Head and upper part of a woman wearing sakkos (bag-like headdress) and himation (mantle) at The British Museum, London

3D
Scan The World
1,634 views 55 downloads
Community Prints Add your picture
Be the first to share a picture of this printed object
0 comments

Head and upper part of a woman wearing sakkos (bag-like headdress) and himation (mantle) at The British Museum, London

"Boeotia is one of the regional units of Greece. It is part of the region of Central Greece. It was also a region of ancient Greece. Its capital is Livadeia, and its largest city is Thebes. The earliest inhabitants of Boeotia, associated with the city of Orchomenus, were called Minyans. Pausanias mentions that Minyans established the maritime Ionian city of Teos, and occupied the islands of Lemnos and Thera. The Argonauts were sometimes referred to as Minyans. Also, according to legend the citizens of Thebes paid an annual tribute to their king Erginus.The Minyans may have been proto-Greek speakers, but although most scholars today agree that the Mycenean Greeksdescended from the Minyans of the Middle Helladic period, they believe that the progenitors and founders of Minyan culture were an autochthonous group. The early wealth and power of Boeotia is shown by the reputation and visible Mycenean remains of several of its cities, especially Orchomenus and Thebes.

The origin of the name "Boeotians" may lie in the mountain Boeon in Epirus. Some toponyms and the common Aeolic dialect indicate that the Boeotians were related to the Thessalians. Traditionally, the Boeotians are said to have originally occupied Thessaly, the largest fertile plain in Greece, and to have been dispossessed by the north-western Thessalians two generations after the Fall of Troy (1200 BC). They moved south and settled in another rich plain, while others filtered across the Aegean and settled on Lesbos and in Aeolis in Asia Minor."

This print requires support and Cura's default settings are suitable. 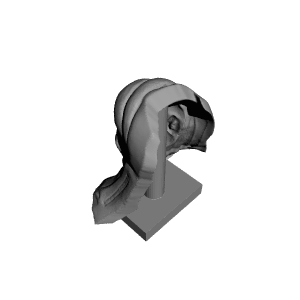 ×
0 collections where you can find Head and upper part of a woman wearing sakkos (bag-like headdress) and himation (mantle) at The British Museum, London by Scan The World