Head of a Yoruba King at The London Docklands, London

3D
Scan The World
2,386 views 242 downloads
1 collection
Community Prints Add your picture
Be the first to share a picture of this printed object
0 comments

Head of a Yoruba King at The London Docklands, London

Widespread ignorance about Africa made it easier for Europeans to spread ideas about the inferiority of African culture and civilisation. This beautiful item from the Benin and Yoruba kingdoms show that superb craftsmanshit and metalworking existed before the time of European intervention.

Over 900 bronze busts sit in museums across Europe and America. They were taken during a British punitive expedition that burned and looted the ancient city of Benin in 1897.

The historican racism towards Africans is compounded by ignorance of the cultural achievements of Africa and its people. But some of the most valued items in our museums are galleries provide examples of the sophistication of African arts and material culture. Is it not time that the richness of African cultural history was acknowledged and received its long-overdue recognition?

This was a nice print and the quality of file is vary detailed. One thing to look out for is to be sure to slow the print for the vary top of the hat to get the best results. This is to reduce the heat build up on this portions. My settings: Nozzle size: 0.3 Layer height: 0.2 First Layer : 0.3 Shell: 0.9 mm Top and Bottom layers: 0.9 mm Infill: 5% Adhesion Type: None Support Type: Lines/Everywhere (i should have used Grid support) 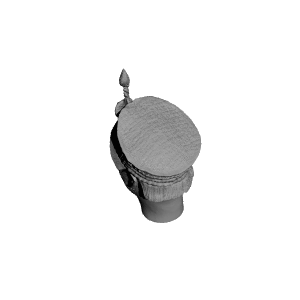 ×
1 collections where you can find Head of a Yoruba King at The London Docklands, London by Scan The World