Head of a Yoruba man at The British Museum, London

Head of a Yoruba man at The British Museum, London

Widespread ignorance about Africa made it easier for Europeans to spread ideas about the inferiority of African culture and civilisation. This beautiful item from the Benin and Yoruba kingdoms show that superb craftsmanshit and metalworking existed before the time of European intervention.

Over 900 bronze busts sit in museums across Europe and America. They were taken during a British punitive expedition that burned and looted the ancient city of Benin in 1897.

The historican racism towards Africans is compounded by ignorance of the cultural achievements of Africa and its people. But some of the most valued items in our museums are galleries provide examples of the sophistication of African arts and material culture. Is it not time that the richness of African cultural history was acknowledged and received its long-overdue recognition?

The slave trade damanged African societies and allowed European nations to deny their coherence and impose European rule. This contributed to the assault on African identities.

From the early 1600s onwards London merchants were importing increasing amounts of gold and ivory from Africa. Yet little was really known about Africa or its people.

Some knowledge came from the wriitngs of Portuguese travellers in the 1500s, but often these mixed truth and fantasy. Legens of fabulous cities and gold mines hidden in the heart of Africa and mythical tales of strange people replaced real knowledge. This, in turn, lead to a dismissal of African cultures. As Africa became the principal source for slaves for the new world of the Americas, ignorance fed racism which, in turn, was used to justify brutal exploitation.

'Is it not strange to think, that they who ought to be considered as the most learned and civilized people in the world, that they should carry on a traffic of the most barbarous cruely and injustice, and that many... are become so dissolute as to think slavery, robbery and murder no crime?'
- Ottobah Cugoano, Narrative of the Enslavement of a Native of Africa, 1787 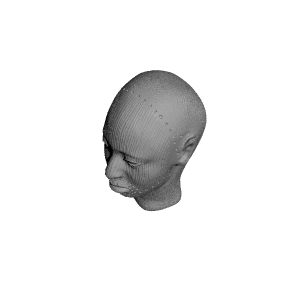 ×
1 collections where you can find Head of a Yoruba man at The British Museum, London by Scan The World
×
CANelson
@Rootsofjoy
1
Printed on: Creality Ender 3 Pro
Material: PLA
Posted at: 23rd September 2021