Head of Artemis at The State Hermitage Museum, St Petersburg

3D
Scan The World
2,229 views 194 downloads
Community Prints Add your picture
Be the first to share a picture of this printed object
0 comments

Head of Artemis at The State Hermitage Museum, St Petersburg

Artemis - the goddess of the hunt, patroness of beasts, stern virgin and protectress of chastity - was also venerated as a deity of vegetation and fertility. As interpreted by the sculptors in the first half of the 4th century BC her image acquired softer features. It was that period (probably the circle of the sculptor Praxiteles) that produced the original that served as a prototype for the Roman copy in the Hermitage collection. The goddess is depicted as a very young maiden. Her exquisite head was tilted slightly and that movement adds Artemis's appearance an intimate, peculiarly Praxitelean charm. Her hair is drawn up and arranged in a plait around the head, which was a rare coiffure, but this kind of hairstyle gained much popularity with the circle of Praxiteles, since it allowed to accentuate the sophisticated beauty of the face. 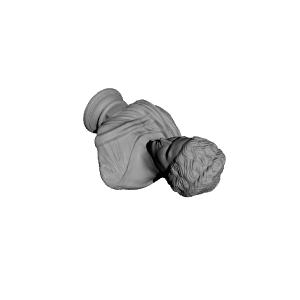 ×
0 collections where you can find Head of Artemis at The State Hermitage Museum, St Petersburg by Scan The World