3D
Scan The World
2,424 views 134 downloads
1 collection
Community Prints Add your picture
Be the first to share a picture of this printed object
0 comments

"Bendis was a Thracian goddess of the moon and the hunt whom the Greeks identified with Artemis. She was a huntress, like Artemis, but was accompanied by dancing satyrsand maenads on a fifth-century red-figure stemless cup (at Verona).

By a decree of the oracle of Dodona, which required the Athenians to grant land for a shrine or temple her cult was introduced into Attica by immigrant Thracian residents, and, though Thracian and Athenian processions remained separate, both cult and festival became so popular that in Plato's time (c. 429-413 BCE) its festivities were naturalized as an official ceremonial of the city-state, called the Bendideia. Among the events were nighttime torch-races on horseback, mentioned in Plato's Republic, 328:"

"You haven't heard that there is to be a torchlight race this evening on horseback in honor of the Goddess?” “On horseback?” said I. “That is a new idea. Will they carry torches and pass them along to one another as they race with the horses, or how do you mean?” “That's the way of it,” said Polemarchus, “and, besides, there is to be a night festival which will be worth seeing." 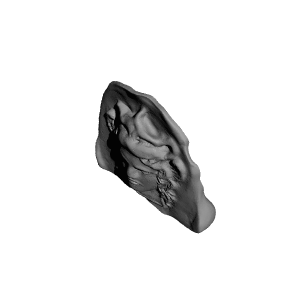 ×
1 collections where you can find Antefix (end-tile): head of Artemis-Bendis at The British Museum, London by Scan The World