3D
Scan The World
5,448 views 359 downloads
7 collections
Community Prints Add your picture
Be the first to share a picture of this printed object
0 comments

A fearsome form of Shiva, the wide-eyed and fanged Bhairava embodies rage. Flames emit from his mouth, eyes, eyebrows, and chin, and his red hair appears as an aureole of fire. It supports a diadem entwined with snakes and skulls and set with large rock crystals. Coiled snakes form his pendant ear ornaments. A small hole pierces the inner mouth to receive the drinking tube used during the annual Indrayatra festival to funnel beer to bless eager devotees. The representation of Bhairava as an independent, mask-like head is unique to the Newari metalworkers of Nepal, who were famous throughout the Himalayan world for their skills in working copper. This mask bears close comparison to an inscribed example dated 1560 and may be dated to the mid-sixteenth century. 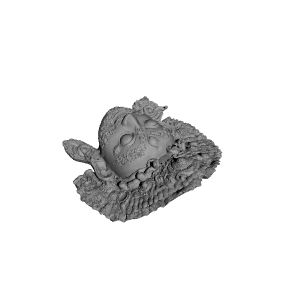