3D
Scan The World
4,332 views 169 downloads
2 collections
Community Prints Add your picture
Be the first to share a picture of this printed object
0 comments

In 30 B.C., Gaius Julius Caesar Octavianus became ruler of the empire that Rome had amassed over the previous three centuries. During the next forty-four years, he introduced institutions and an ideology that combined the traditions of Republican Rome with the realities of kingship. In 27 B.C., the Senate conferred on Octavian the honorific title of Augustus, an adjective with connotations of dignity and stateliness, and around this same time, an official imperial portrait was created that embodied the qualities that Augustus wished to project.

Hundreds of versions of this portrait on coins, gems, busts, monumental reliefs, and statues were disseminated throughout the empire during his reign and thereafter. This particular over-lifesize head at the Louvre in Paris may have been part of one such statue of the emperor made during the reign of his successor Tiberius (1994.230.7). This kind of imperial image represented a new conception in ruler portraiture—certain features are somewhat individualized, such as the broad forehead with a distinctive arrangement of locks, a wreath and prominent ears, but the overall effect is one of elevated dignity that recalls Greek Classical statues of the fifth century B.C. 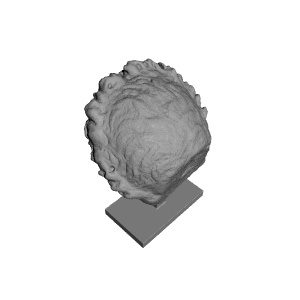 ×
2 collections where you can find Head of Emperor Augustus at The Réunion des Musées Nationaux, Paris by RMN