3D
Scan The World
2,359 views 112 downloads
Community Prints Add your picture
Be the first to share a picture of this printed object
0 comments

The model for this bust has proven difficult to identify. The hairstyle does not match those of Augustus, whose drooping eyebrows more closely framed the eyes. Nor does the portrait resemble those of any of Augustus’s grandchildren: Caius, Lucius Caesar, and Agrippa Postumus. Clearly executed after Caius’s death in 4 A.D., the face represented can therefore only be that of Germanicus, Livia’s grandson, who married Agrippina the Elder, Augustus’s granddaughter, in 5 A.D.

Between his adoption by his uncle Tiberius in 4 A.D. and the death of Augustus ten years later, Germanicus frequently accompanied Augustus on military campaigns. During this period, portraits like this one proliferated. The piece can be dated to this time, between 8 and 10 A.D. (as can the heads in the British Museum 1883 and 1884, the Munich Residenz, and the Louvre Ma 3135). Cast aside by Tiberius after 14 A.D., Germanicus would only begin to be represented again, posthumously, as of 19 A.D.

In its current state, this male head appears as a mask consisting simply of the face and the front of the neck. The back of the sculpture was cut away on three planes: a vertical or occipital plane, a nearly horizontal or summit plane, and an oblique or right temporal plane. Beneath the Adam’s apple, the neck has been broken along three lines. Traces of polychromy have survived in the hair, particularly in the hollows of the locks on the right side of the head and above the left eye. The polychromy consists of a calcium carbonate mixed with red ochre, typical of mineral pigments. Traces of paint on the eyes were observed during the restoration.

Roman-era heads originally constructed out of several pieces are quite an enigma. The hair, lips, eyes, and clothing were most often given a coat of paint to conceal joints and fillings, offsetting any aesthetic drawback of making the heads out of several pieces. The technique was the result of economic, social, and technical factors: sculptors, mostly Greek artisans both poorly paid and ill-considered in Rome, found the cost of raw materials too high to be able to abandon large pieces of marble. It is also likely that in an attempt to divide labor, actual portraits were sculpted by a specialist, while the hair was made by a younger or less talented workman from one or two pieces already added to the head. An unsuccessful portrait was therefore not of any great consequence.

It has been suggested that this portrait could be of the velato capite type known to include two portraits of Germanicus. Yet here the bond lines are not symmetrical: the line above the left temple does not correspond to the one on the right. Joined surfaces were crafted in a different manner. Originally, the top of the skull was set on a join bed studded with small recesses. Following an accident, the back of the head had to be planed down to attach a piece with a mortise; the top of the skull, now loose, was reattached with the same system. A shock to the right temple probably required the attachment of a third element, which was simply glued, possibly in the modern era. This second accident probably caused the irregular break around the neck. A third mishap may have led to the head being abandoned and, later, to all the additions being removed. 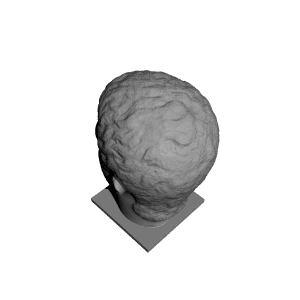