3D
Scan The World
1,074 views 47 downloads
Community Prints Add your picture
Be the first to share a picture of this printed object
0 comments

This is an ancient marble head-portrait sculpture depicting Homer, the earliest major poet of the western world. In the 8th or 7th century BC he composed two epic poems, partly derived from earlier recited poems or songs. These are the 'Iliad' (about part of the Trojan War) and the 'Odyssey' (about Odysseus' travels after the war and his return home). They seem mainly to reflect conditions in Greece after the Bronze Age but include many references to earlier conditions and objects. His works were regularly recited at Greek festivals and formed the basis for much Greek education by giving examples of proper and heroic behaviour. Traditionally, he was blind and is so shown in portraits from the 4th century on. His birthplace was disputed, mainly between Chios and Smyrna, but he belongs in the north Ionian area. 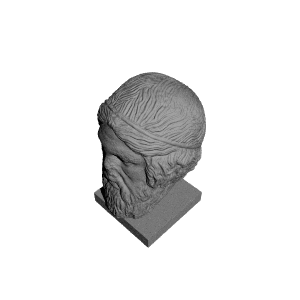