3D
Scan The World
1,590 views 54 downloads
Community Prints Add your picture
Be the first to share a picture of this printed object
0 comments

This is the head if Isis depicted with the cow's horns as a headdress.

In the Egyptian pantheon, Isis is the sister and wife of Osiris and the mother of Horus. The Egyptian pharaoh was considered the earthly embodiment of Horus. Isis also represents the pharaoh’s throne.

Worship of the goddess Isis was Africa’s most influential cultural export to the Greco-Roman world. For example, this head was found at the Aphrodite-Isis Temple at Soli. 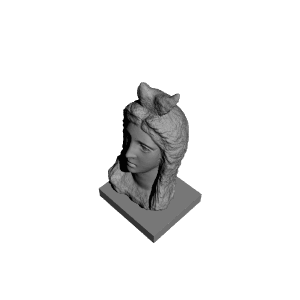