Head of Polyphemos at The Museum of Fine Arts, Boston

3D
Scan The World
8,815 views 342 downloads
4 collections
Community Prints Add your picture
Be the first to share a picture of this printed object
0 comments

Head of Polyphemos at The Museum of Fine Arts, Boston

This head comes from a group, probably of the blinding of Polyphemos, similar to that constructed from fragments found in the grotto at Sperlonga, along the Italian coast southwest of Rome. Polyphemos is based, in details of hair and beard, on a Pergamene centaur. The sculptor was wise in rejecting the older tradition, one seen in Hellenistic terracottas, of showing the monstrous giant as a kind of fat-faced baboon, with large ears and his eye set like a beacon light in the middle of his forehead. Here the rugged, animal power of the creature has been stressed.
Broken off through the neck and the lower whiskers, the head is in relatively excellent condition, save for the damage to the beard below the mouth. The marble has a yellow-buff tone.

This is the head of the one-eyed, man-eating Cyclops whom Odysseus finally outwitted and blinded. Here the monster is in a peaceful mood, either waiting to receive the cup of wine offered him by Odysseus, or, more likely, gazing love-struck at the indifferent sea nymph Galatea. The head comes from a sculptural group that might have adorned a public fountain or a luxurious seaside villa. The type originated in the second century B.C., yet the lively and direct style of this piece makes difficult to judge whether it is a contemporary variant or a Roman copy. 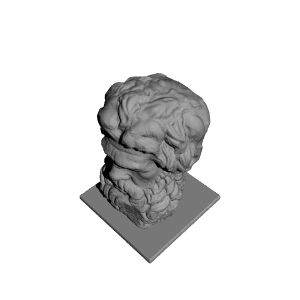 ×
4 collections where you can find Head of Polyphemos at The Museum of Fine Arts, Boston by Scan The World