3D
Support Free Scan The World
5,115 views 211 downloads
2 collections
Community Prints Add your picture
Be the first to share a picture of this printed object
0 comments

Half man and half animal, satyrs were part of the entourage of Dionysus, the god of wine. They spent their time participating in revels, drinking, and chasing nymphs. This satyr's head is carved from red marble (rosso antico), quarried in the ancient area of Tainaron in the Peloponnesus, the peninsula south of mainland Greece. Because rosso antico is the color of red wine, it was often used for statues of Dionysus and his followers, both man and animal (such as satyrs, fauns, and goats).

Colored marbles, not widely used in Greece until the Hellenistic period, began to appear in Rome in the 2nd century BCE. In fact, it was with the conquest of Greece, Asia Minor, and especially Egypt that the Romans developed a special taste for colored stones, to which they assigned specific meanings.

At the Minneapolis Institute of Arts is this battered but still-charming head of a satyr. He dates from around the 1st century BC (?) and is sculpted from red marble.

I recreated him with over 40+ photos taken from as many angles as possible, which later were used in Agisoft Photoscan. The final model turned out wonderful, except for a small strip of missing covereage on the rear and top of his head!

The satyr is about eye level and displayed against a wall so I had to contort and twist to catch most of the photos, but I wasn't able to hold the camera in a steady way overhead without blurring any of the shots. I had no access to the rear of his head, but had been confident that I'd captured all of it.

To fix the holes, I imported the satyr into Meshmixer and filled the holes then worked the smooth out the jagged artifacts. The filled spots are still visible, but they don't jump out as before.

The last thing I did was add a strut and plinth under the satyr so he wouldn't just lay around after being printed. The display isn't my best work but its also the first one I've created.

For more information on this fascinating sculpture, check out the link: http://collections.artsmia.org/art/81221/head-of-satyr-roman 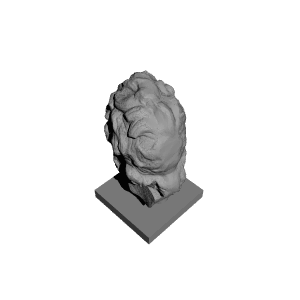 ×
2 collections where you can find Head of Satyr at The Minnesota Institute of Art, Minneapolis by jerry7171