3D
Scan The World
1,104 views 56 downloads
Community Prints Add your picture
Be the first to share a picture of this printed object
0 comments

From the old Royal Prussian Collection
Marble, Roman, after a model from around 470/460 BC

Aspasia was the wife of the Athenian strategos Pericles. However, it remains unclear whether the Greek original, which was the model for this copy, really represented Aspasia. The only certainty lies in the fact that this entirely non-individual head type belongs to a robed statue from the early classical period surviving in several copies. 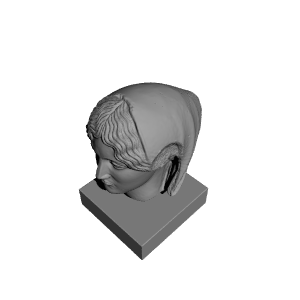