3D
Scan The World
1,674 views 81 downloads
1 collection
Community Prints Add your picture
Be the first to share a picture of this printed object
0 comments

This gilt bronze head of the goddess Sulis Minerva is one of the best-known objects from Roman Britain. Its discovery in 1727 was an early indication that the Roman site at Bath was not a typical settlement. Gilt bronze sculptures are rare finds from Roman Britain as only two other fragments are known.

The head is probably from the cult statue of the goddess which would have stood within her Temple beside the Sacred Spring. From there she may have looked out across the Temple courtyard to the site of the great altar, the site of sacrifice, which stood at the heart of that sacred space. The statue may well be an original object from the foundation of the site in the later first century AD, which means that it was probably well over 300 years old when it met its demise.

The head is slightly larger than life-size, suggesting that the original statue was an imposing sight. Hidden in the hairline are several small holes which once held rivets that fixed her tall Corinthian helmet to her head.

Examination of the head has revealed that it has six layers of gilding. The first two use a technique known as fire gilding whilst the four later layers are applied as gold leaf. The head has a number of imperfections. There is corrosion which has affected it in parts where it lay in the ground for over a thousand years. There is also a strange rectangular cut beneath the chin. It is thought that this may result from a flaw in the original casting process in which a bubble on the surface may have been cut out and filled with an inserted plate. When gilded over it would not have been visible. This plate has subsequently fallen out as a result of corrosion whilst in the ground. 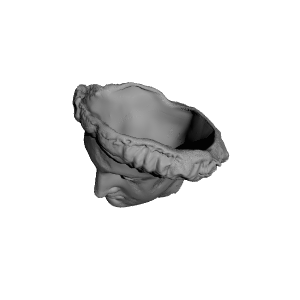