Head of the Emperor Trajan

3D
360°
Scan The World
1,641 views 65 downloads
1 collection
Community Prints Add your picture
Be the first to share a picture of this printed object
0 comments

Head of the Emperor Trajan

Born in the province of Spain in 53 A.D., Marcus Ulpius Traianus was the first emperor not to be of full Italian origin. Cassius Dio recounts that Trajan’s predecessor, Nerva, adopted him as successor “for he believed in looking at a man’s ability rather than his nationality” (Roman History, Epitome of Book 68, 4.2, vol. 8). An outstanding commander, Trajan's military exploits included successful campaigns against the Dacians and the Parthians, as well as holding command of several armies in Spain, the Danube and the Rhine. Because of these conquests, the Empire reached its greatest expansion during his reign. In addition, he was a wise administrator and initiated numerous important public building programs in the provinces as well as in Rome, rivaling those of Augustus and the Flavians. These were funded from the spoils of his campaigns and included a new harbor at Ostia and his own forum and market in Rome.

Trajan was 45 years old when he came to power, and portraits made during his lifetime represent him as maintaining this age throughout his reign. D.E.E. Kleiner (Roman Sculpture, p. 208) writes that representations of him "are of considerable interest because--if Augustus was the eternal youth--Trajan was the ageless adult." This present example depicts the Emperor wearing an oak wreath, the corona civica, or civic crown, an honorary title granted by the Senate as a reward of talent and military accomplishments. Owing to the head’s large scale, we can assume it would have belonged to a monumental figure that was intended to be viewed at a distance. The face is unlined yet mature, with the straight locks brushed forward onto the forehead in a style popularized by the Emperor and similar to the coiffure worn by Augustus. As Kleiner explains (p. 208, op. cit.), "Trajan's goal was to disassociate himself from the Flavians, especially Domitian, and to play up his connection to Augustus. This is not surprising since Trajan, like Augustus before him, chose to expand the empire, and both emperors enacted major social legislation."

Kleiner writes that the portraits of Trajan can be divided into several types in accordance to subtle variations in the arrangement of the hair over the forehead. This portrait cannot easily be ascribed to a type, leading Jucker (op. cit., p. 27) to suggest that the head could have been the workmanship of an Eastern sculptor.

For other representations of Trajan wearing the civic crown, see the example in Munich (p. 137 in C.H. Beck, Glyptothek München), and in Piraeus (cat. 5 in C.C. Vermeule, Roman Imperial Art in Greece and Asia Minor). 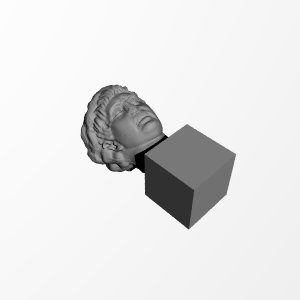