Head of The Rampin Rider at The Réunion des Musées Nationaux, Paris

3D
Scan The World
3,051 views 157 downloads
1 collection
Community Prints Add your picture
Be the first to share a picture of this printed object
0 comments

Head of The Rampin Rider at The Réunion des Musées Nationaux, Paris

The Rampin Horseman is a masterpiece of Archaic art, which blends Attic seriousness with the rich decorative tradition of eastern Greece. The head, which is original, is placed on a mold taken from a fragmentary equestrian group in the Acropolis Museum in Athens. The identity of the horseman is uncertain. We appear to be in the presence of a hero or a member of the Athenian aristocracy-unless the crown of leaves that he wears is a victory prize awarded in one of the Panhellenic games.

This male head, which was found on the Acropolis in 1877, was sculpted around 550 BC. It was purchased by Georges Rampin, who left it to the Louvre in 1896. Ten years earlier, a body of a horseman and fragments of a horse had been found on the Acropolis; they were excavated from a ditch that was dug to hold statues that were broken during the sack of Athens by the Persians in 480 BC. It was not until 1936 that the English archaeologist Humphry Payne connected this head with the equestrian group in the Acropolis Museum in Athens (molds of the group have been added to the Louvre's presentation of the head). The asymmetrical neck, which is unusual in sixth century BC sculpture, is explained by the fact that the group is thought to have comprised two horsemen forming a pair.

The identity of the horseman is uncertain. For a long time, the hypothesis of a second horseman encouraged the notion that it was dedicated to Hippias and Hipparchus, the sons of Pisistratus, whose names predestined them to horseback riding. Horses (in Greek, hippos) were a privilege reserved for members of the aristocracy. The monument would have been erected after the return of the tyrant to Athens in 546 BC. It was thus supposed that the group was a depiction of Castor and Pollux-equestrian heroes frequently pictured on vases between 550 and 510 BC-without necessarily ruling out the Dioscuri or the Pisistratidae as subjects.

An examination of the fragments has shown that they belonged to other horses, disproving these hypotheses. If this is an ex-voto, then it would not feature two people but one-the Rampin Horseman was one among many such offerings dedicated on the Acropolis by horsemen. They showed the winner in a horse race cheered by the crowd, which he acknowledges by a turn of his head. This new interpretation would explain the presence of a crown of lovage in the horseman's hair; this species of wild celery was used to crown winners in both the Nemean Games and the Isthmian Games, which were held in Corinth.

The execution of the Louvre's head is masterful. It is sometimes attributed to the "Rampin Master," the sculptor of the Athens kore wearing a peplos (530 BC; Acropolis Museum). The two pieces feature the same Attic concept of the face: the triangular structure is framed by high cheekbones and a pointed chin, and the face is welcoming, animated by almond-shaped eyes and a gentle smile. Nevertheless, the Rampin Horseman blends sobriety with richly decorative hair ornamentation. The thickness of the beads, the fringe consisting of small rolled plaits, and the beaded work on the beard show the influence of eastern Greece, which spread to Athens via Ionian immigrants fleeing Asia Minor and the Persian threat. Red and black polychrome, partially preserved, adds to this sense of refinement. 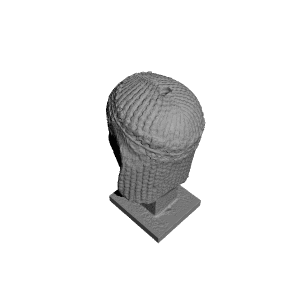 ×
1 collections where you can find Head of The Rampin Rider at The Réunion des Musées Nationaux, Paris by RMN