A herm such as this is a sculpture, often with a head and perhaps a torso, above a plain squared lower section. Often if it is a man depicted, male genitals  will be carved at the appropriate height. This herm strange in that it lacks a head, instead paying special attention to the torso. It is unclear if this is due to damage or artistic choice.

Hermae are so called because the head of the Greek god Hermes was the most commonly used, or connected with the Greek word for “blocks of stone”, which had originally no link with Hermes at all.

This style of sculpture originated in Ancient Greece, and was adopted by the Romans. Later revival occurred during the Renaissance. 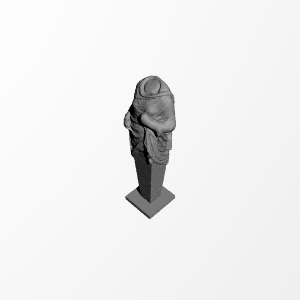