HOW TO PLAY HEADSMAN'S CHESS (Version 1.0): Headsman's Chess is played in same manner as a regular game of chess except in the following ways: Each player begins the match with a "Headsman" piece which they set up by swapping the hooded headsman for the heads of one of their pawns. The headsman moves and captures in the same manner as a king though counts as a pawn for all intents and purposes. When a player makes a capture with their headsman, the captured piece's head may be swapped onto any piece adjacent to the headsman (after the capture move has been made) transforming the adjacent piece (friend or foe) into the type that was captured. The headsman may itself be captured and have its head transferred in this manner as well.

This part was made with Tinkercad. Edit the part online at: https://tinkercad.com/things/cK6xZm032Ne

The heads are printed separately from the bodies. Each piece is modular as the heads may be swapped from one piece to another. 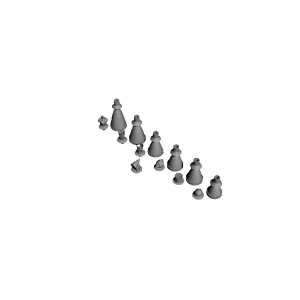