Hebe is the Goddess of Youth whose role in Classic mythology was to pour the drink of immortality to the other Greek gods, as well as assisting her parents (Hera and Zeus) with daily tasks.

In the myth Hebe is dismissed from being the water carrier. Although there are many contrasting reasons to this, such as the Church of England claiming she slipped and revealed her naked body the Gods or accidentally feeding her mother a lettuce leaf which causes her to become pregnant. The widely accepted narrative, as seen in this depiction of the young goddess, is that she spilled a drop of the precious liquid. In this beautifully poised statue (the folds of her dress almost like the fluting of an antique column) she is shown at a point where the nectar is about to spill, playing tentatively with balance. 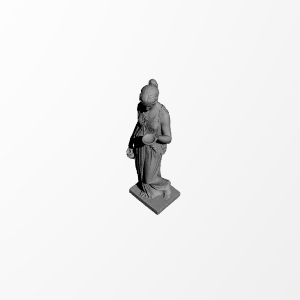