This is the model of Heen, a dog from the film Howl's Moving Castle by Hayao Miyazaki. The dog lays flat on a round carpet.

Heen is a small and very ancient white and brown dog who appears only in the film (not the book). He works for Madame Suliman as an errand runner and an inconspicuous, though unreliable, spy. He appears to replace Percival from the books. The small white dog Waif seems to be a nod to the character from the movie. 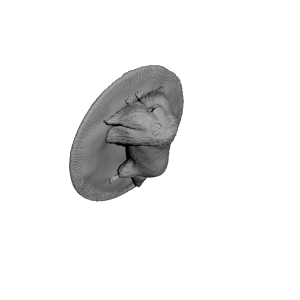 ×
10 collections where you can find Heen the dog (from Howl's Moving Castle) by vasiliskatsaros
×
laure stelmastchuk
@laurestk
0
Printed on: Prusa Mendel I3
Posted at: 09th February 2016