I give you a Hellboy bust with a more comic look!

You can also find him as a full figure if you support my patreon page at 5$ and 10$ tiers.

The Hellboy series made its first appearance as a four-page, black and white comic by Mike Mignola with a script by John Byrne published by Dark Horse Comics in San Diego Comic-Con Comics #2 (19 August 1993), distributed at the San Diego Comic-Con. This piece was used to promotional piece for Hellboy's debut miniseries Seed of Destruction.

After the conclusion of Seed of Destruction, Mike Mignola took over scripting duties on the comics and has since written every Hellboy story himself, with the exception of They That Go Down to the Sea in Ships which he co-wrote with Joshua Dysart.

supports needed for the chin 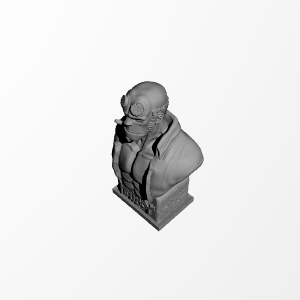 ×
46 collections where you can find Hellboy Bust by FotisMint
×
FilamentOne
@filamentone
12
Printed on: Ultimaker 2+
Material: PLA
Posted at: 28th June 2019

One of my favourite things. Thx!

Printed using standard settings on Cura. Painted glossy black and fished up with gold rub-and-buff - for a aged look.