3D
Featured Scan The World
4,584 views 299 downloads
Community Prints Add your picture
Be the first to share a picture of this printed object
0 comments

This bronze statuette, housed at the Nouveau Musée National de Monaco, depicts the young King Henry IV of France. The neoclassical sculptor Francois-Joseph Bosio (Monaco, 1768 - Paris, 1845) experimented with troubadour art - a 19th century art style which followed idealised depictions of the Middle Ages and the Renaissance, considered an aspect of Romanticism and a reaction against Neoclassicism.

The tudor costume, an successful example of the the Trubadour style, was chosen by the artist to move the spectator (unlike neoclassical art, which seeks to edify). . The portrayal of kings as children provides a touching contrast between the innocence of their state and the gravity of their destiny. Bosio was probably inspired by a 16th-century portrait of Henry IV at the age of four (Château de Versailles) by François Bunel (1522-1599), court painter to the kings of Navarre.

Although the artist respected the antique tradition here by giving the sculpture a calm, impassive, and impersonal appearance, he also gave it the undeniable freshness which made the work so successful. 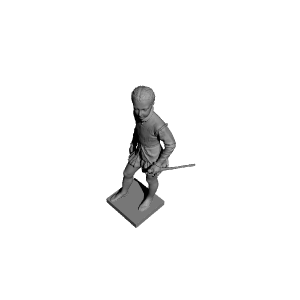