3D
Scan The World
3,139 views 85 downloads
Community Prints Add your picture
Be the first to share a picture of this printed object
0 comments

This bust depicts Herbert Spencer (1820-1903) who was a philosopher; he formed the system of philosophy based on the doctrine of evolution. He wrote 'First Principles' in 1862, and 'The Principles of Biology' in 1864. He was a member of 'x' club with Huxley and Tyndall and also published on psychology, education, sociology and ethics. He argued for freedom of the individual and limitation of the state. The marble bust, completed in 1884, was created by Sir Joseph Edgar Boehm (1834-90) and was bequeathed to the National Portrait Gallery in 1904 by the sitter. 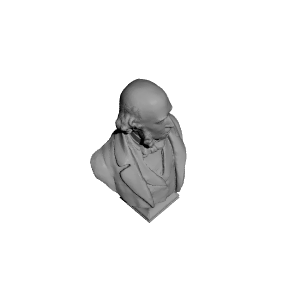 ×
0 collections where you can find Herbert Spencer at The National Portrait Gallery, London by Scan The World