Hercule Gaulois at The Louvre, Paris

3D
Scan The World
3,875 views 295 downloads
Community Prints Add your picture
Be the first to share a picture of this printed object
0 comments

Hercule Gaulois at The Louvre, Paris

Hercules is the Roman name for the Greek divine hero Heracles, who was the son of Zeus (Roman equivalent Jupiter) and the mortalAlcmene. In classical mythology, Hercules is famous for his strength and for his numerous far-ranging adventures.

The Romans adapted the Greek hero's iconography and myths for their literature and art under the name Hercules. In later Western art and literature and in popular culture, Hercules is more commonly used thanHeracles as the name of the hero. Hercules was a multifaceted figure with contradictory characteristics, which enabled later artists and writers to pick and choose how to represent him.

This sculpture, Heracles Gaulois dated 166, was carved out of Carrara marble by Pierre Puget. It depicts Hercules reclined, holding the golden apples from the garden of Hesperides after his eleventh trial. After Heracles completed his first ten Labours, Eurystheus gave him two more claiming that neither the Hydra counted (because Iolaus helped Heracles) nor the Augean stables (either because he received payment for the job or because the rivers did the work). The first of these two additional Labours was to steal the apples from the garden of the Hesperides. Heracles first caught the Old Man of the Sea, the shape-shifting sea god, to learn where the Garden of the Hesperides was located.

He sits cloaked in the skin of the Nemean lion that he killed in his first trial. 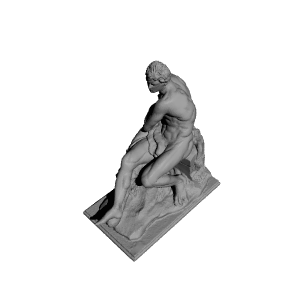 ×
0 collections where you can find Hercule Gaulois at The Louvre, Paris by Scan The World