3D
Scan The World
2,224 views 175 downloads
1 collection
Community Prints Add your picture
Be the first to share a picture of this printed object
0 comments

Antaeus, son of Gaia and Poseidon, was a Libyan giant whose strength appeared invincible. He challenged all passers-by to a wrestling match that he invariably won. Upon winning, he slaughtered his adversaries. That is until he met Hercules.

Hercules had gone to the garden of the Hesperides for an apple. (The Hesperides, daughters of Night or the Titan Atlas, took care of the garden.) On Hercules' way back, the giant Antaeus challenged the hero to a wrestling match. No matter how many times Hercules threw Antaeus off and tossed him to the ground, it did no good. If anything, the giant appeared rejuvenated from the encounter.

Hercules eventually realized that Gaia, the Earth, Antaeus' mother, was the source of his strength, so Hercules held the giant aloft until all his power had drained away. After he killed Antaeus, Hercules proceeded safely back to his task master, King Eurystheus. 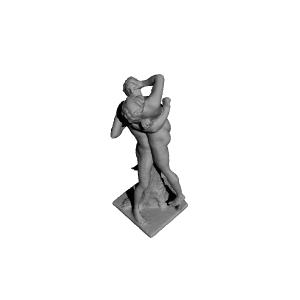