3D
Scan The World
1,796 views 57 downloads
Community Prints Add your picture
Be the first to share a picture of this printed object
0 comments

This sculpture depicts the famous myth about Hercules fighting Hydra.

The second labour performed by Heracles was to slay the water serpent Lernaean Hydra. Wielding his club, he smashed the many heads of the Hydra but as soon as he smashed one, another two would spring from its place. The Hydra had also coiled itself around one of Heracles’ feet and he was unable to move. Realizing that he was unable to defeat the Hydra by just smashing its heads, he called upon Iolaus to help him. As Heracles smashed the multiple heads of the Hydra, Iolaus would apply a firebrand to the severed neck stumps. With only the immortal head remaining, Heracles is thought to have either torn it off with his bare hands or chop it off with a golden sword given to him by Athena. 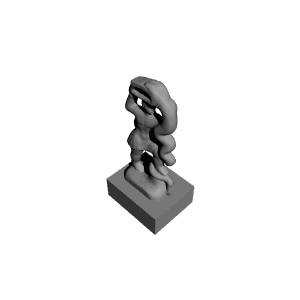