3D
Scan The World
1,920 views 41 downloads
Community Prints Add your picture
Be the first to share a picture of this printed object
0 comments

There were different ancient Greek traditions where the club was made and what it was made from; one tradition said Heracles made the club for himself at Nemea by cutting from a tree, e.g. Pseudo-Apollodorus (2. 4. 11). :“Having first learned from Eurytus the art of archery, Hercules received a sword from Hermes, a bow and arrows from Apollo, a golden breastplate from Hephaestus, and a robe from Athena; for he had himself cut a club at Nemea.”

Theocritus in his Idyll (25) on Heracles, instead of notes Heracles made the club from pulling up an olive-tree by its roots or stem, but on Mount Helicon in Boeotia; the club was therefore in this tradition an entire tree, rather than just a cut piece from it.

Another ancient tradition, however, said the club was given to Heracles by Hephaestus and was made out of brass, or bronze-tipped; the classical source for the latter is Diodorus Siculus. 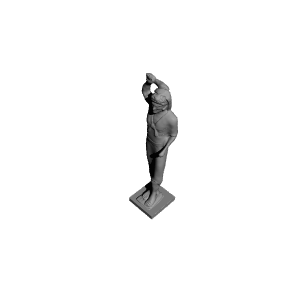